Cyberscape Neo is an audio-drama in which the narrative takes place primarily within the game of the same name. The Cyberscape itself is a massive software entertainment package stitched into an operating system release. Imagine an operating system that hosts a majority of the world’s VR multiplayer online games and has become a primary source of entertainment of youth and adults alike. The story follows multiple viewpoints, but mainly focuses on two groups with vastly differing circumstances and goals.

The first perspective is that of the Synthetic Users, people who have had their consciousness implanted within the Cyberscape before poor health or a terrible accident would have led to an earth death. This granted them eternal life in a way, but the rest of that life would be spent inside of a virtual landscape that the CEO of Encephalon, the creator of the game, put them in.

The second perspective is that of a group of quirky, ambitious players who all play Cyberscape Neo for differing reasons, ranging from obsession with unique content, intense PVP, a meaningful personal quest, or familial obligations. Their interactions with this new game — that not only attempts to engage players, but also acknowledges the Synthetic Users — will dictate the future of both.

The recurrent themes in CN are that of contrasting perspectives, existentialism, fantasy versus sci-fi, and transhumanism. While inside of this game, one person may be enjoying dangerous content and be negligent of any risk of having their character be struck down, while another may be fighting to stay alive, as it might be the only existence they have left. One person may find solace and escape within the digital playground, while another has no escape left and is stuck within a technological enclosure that is the database they are saved on. These contrasts bring life and a unique take on this genre. I hope you enjoy your time listening, and welcome to the Cyberscape! 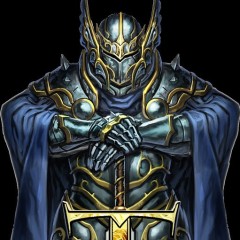 View all posts by Titanium Templar
Skip back to main navigation